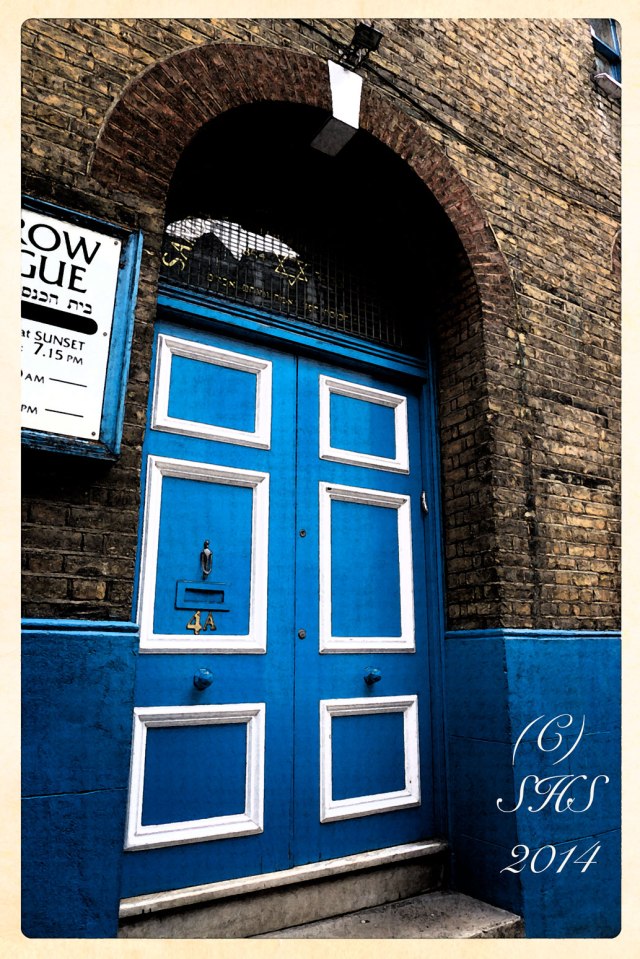 I was quite surprised and pleased to find this bright blue door in a sea of brown bricks. It wasn’t quite a burst of sunshine on a dark dull day, but it came pretty close to it!  We all have preconceived notions and for me, it was a bright blue door on a  synagogue that surprised me.

Sandy Row Synagogue has been around for yonks.  So many places of worship live different lives and this little door was no different. It started out in 1766  as a church founded by the refugees of the Huguenots who named it,  L’ Eglise de L’ Artillerie. It wasn’t even Sandy Row back then, it was Parliament Street. Then life goes on and it became an Universalist Baptist Church, then Unitarian, then Scottish, until it was bought in the mid ninetieth century  by a Jewish Society–– The Comforters of Mourners Kindness and Truth Society. Quite a mouthful and so full of meaning. Life for this door was now that of a synagogue. Through these doors early immigrants walked in for comfort, the diamond workers, the cigar makers, the tailors, and more. It became the oldest Ashkenazi Synagogue in London after the Nazi’s obliterated the Great Synagogue of London on May 10, 1941. A little blue door with an amazing depth of history.

It’s rare to catch me without coffee, a form of camera, or my beloved wire fox terriers. I love the history, the art, and it’s a massive part of my life, as I either paint, write, or get interrupted by my dogs, reminding me of the real world. I hope you enjoy your time here. It’s such a privilege to have readers.
View all posts by susan sheldon nolen →
Gallery | This entry was posted in Doors and tagged London Synagogues, Sandy Row, Sandy Row Synagogue, Spitalfields, The Great Synagogue of London. Bookmark the permalink.