Tales from the City- Dover Castle 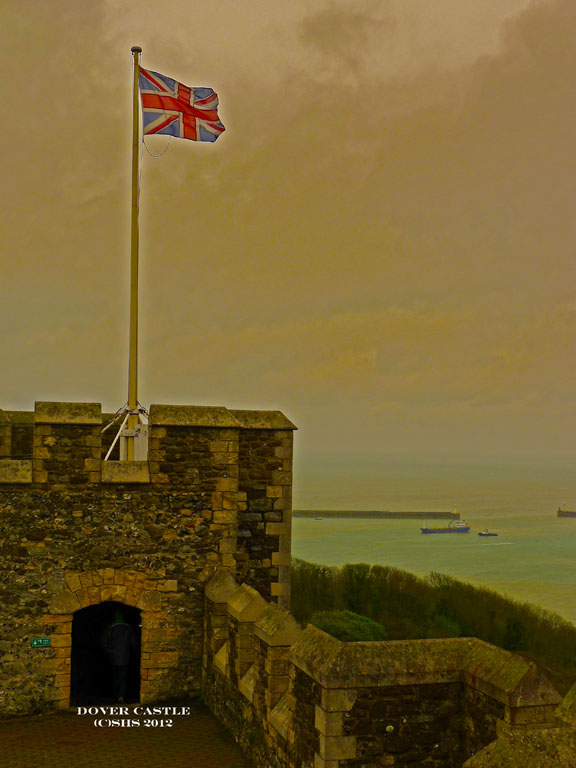 It was one of those Sundays, when you don’t want to stay indoors regardless of the weather so we headed out to Dover Castle which sits grandly on top of The White Cliff’s of Dover. The snowy white cliffs are a part of the North Downs and have seen some of Britain’s most dramatic points in history.

In between the slabs of white chalk, black flint streaks through. In Kent and in other chalky areas, if you don’t filter you water for your tea kettle, well, you might find the white chalky sediment at the bottom of it!

The Romans came to Dover and left a lighthouse.  The stone tower, some two thousand years old, was used as a Beacon to guide the Romans across the English Channel, the earliest form of sat nav. The castle built entirely of Caen Stone is massive. An everlasting symbol of power and prestige, built for a King and his realm.

The castle was almost deserted as the gusts of wind blew us into a curved position whilst we struggled to walk about the castle grounds. I can’t help but think how hard life must have been back then. I was wearing my waxed jacket and keeping dry,  but the flood of rain poured over the jacket on to my knees. How awful it must have been to stand guard duty all night with perhaps a small fire to keep warm, or not.

Dover Castle sits high on the White Cliffs of Dover. Those last words always  trigger the sound of Vera Lynn belting out, there’ll be blue birds over the white cliffs of Dover. It was one of my father’s favourite songs. A memory from the war years.

Dover is the shortest distance between England and mainland Europe and it is this closeness that allowed heroic men and women, to get into small boats to rescue the soldiers in Dunkirk. When you cross the channel on a ferry-boat and feel the waves and the dips, the very idea of small sailboats, row boats, anything that would float, battling the channel to rescue the troops, one clearly gets the idea this was a dangerous journey and incredibly heroic.  Just think in nine days, some 192,226 British and 139,000 French soldiers – 331,226- were carried away from the horrors of war to safety. It is in incredible story.

The view from the Western Heights is stunning. The wind was so strong that day, it brought wind tears to my eyes!

I am not a big fan of heights. As I leant against the keep’s wall, I could imagine how easy it would have been to push your enemy over the side in a fit of jealousy, or too much drink. I wonder how many ” accidents” may have happen in years of yore.  So double checking that no one was behind me, I closed my eyes and leaned over and took this shot.

Course for an ” accident” to happen the inside of a castle was not any safer for those who were not light in the foot. Even with the modern addition of handrails, it takes a bit of adjustment, the stairs are steep, narrow, and  worn in the middle where man has over the centuries found the best footing. 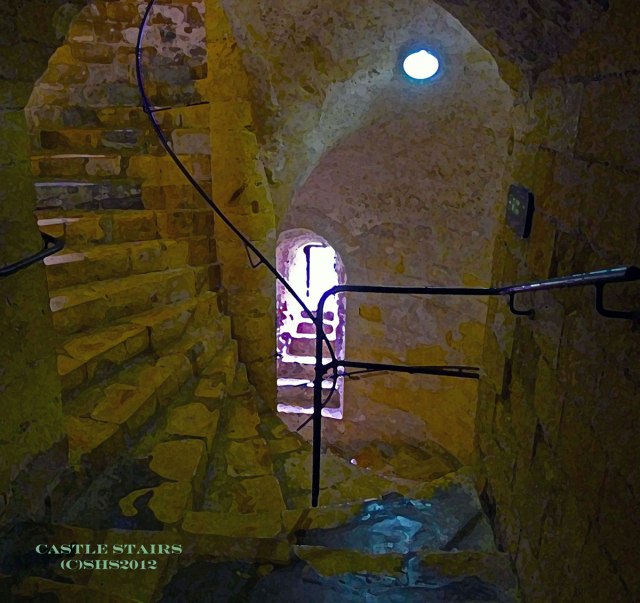 Carrying food to the great halls with sloshing jugs of wine and beer must have taken quite a bit of skill. Skill no doubt formed through hours of hard labour. The great hall although expertly lit by modern lighting, must have been breathtaking with the candles and torches burning.

Although the candles are modern and the jugs reproductions, the castle display does give one the feeling that life was simple back then. Simple in the sense that life was utilitarian and only the King had the luxury of decorations.

This was not my first trip to Dover Castle, and I was glad to visit again for Dover really has two parts to it. The Castle, the grounds and the stunning view, and then the secret wartime tunnels. The war tunnels were first built in 1797. An  old idea, a tunnel in the chalk hills to protect the soldiers, used once again during the war in the 1940‘s in Operation Dynamo. Churchill and his team spent countless hours defending England from this location. The tunnels are only partially opened to the public as there are well over three miles of tunnels deep in the chalk cliffs.

The first of the cliffs are named after the Great Bard. Perhaps he really did visit Dover whilst writing King Lear as speculated, and left us with these words.

‘There is a cliff, whose high and bending head Looks fearfully in the confined deep: Bring me but to the very brim of it, And I’ll repair the misery thou dost bear With something rich about me: from that place I shall no leading need.’

It’s rare to catch me without coffee, a form of camera, or my beloved wire fox terriers. I love the history, the art, and it’s a massive part of my life, as I either paint, write, or get interrupted by my dogs, reminding me of the real world. I hope you enjoy your time here. It’s such a privilege to have readers.
View all posts by susan sheldon nolen →
This entry was posted in England, photography and tagged Caen Stone, Dover, Dover Castle, Dunkirk, England, English Channel, King Lear, National Trust for Places of Historic Interest or Natural Beauty, North Downs, Operation Dynamo, Vera Lynn, waxed jacket, white chalk, White Cliffs of Dover. Bookmark the permalink.

3 Responses to Tales from the City- Dover Castle