The old typewriter was a large part of my childhood.  I made my first attempts to type on its stubby olive keys, under the watchful eye of my father.  I was not aware of the emotion attached to my childish pounding the keys, and only thought he watched me to prevent my fingers from somehow rendering his sturdy machine unusable.

It takes effort to type.  This old manual bangs away with a loud clap, clap on the paper, and if the force of the keys are too strong, it leaves behind not only the impression of inked letters, but tiny holes where the periods have not only made their presence felt, but actually have punched through the paper.

I used to fall asleep to my father’s typing as he wrote letters late into the night, listening to Indian music so loudly, that no shouting down the stairs from my room would cause the music to soften.  In seething rebellion, I turned the dial of my red radio as loudly as it would go, but the Beatles, You say want a revolution, could not match in volume, or sheer force of presence, the dominating tones of the India Ragas.  It was a battle quickly lost.

The nightly sound of the keys hitting the paper and the little bell tinkling that the end of the line was approaching soon, were to me no different than a mother’s lullaby.  I knew as long as the clatter of the keys punctuated the still night, all was well in the world.

When my father died, the typewriter was a part of my inheritance along with his letters.  The typewriter sat in its case with carbon paper and envelopes, waiting for action.  I had my computer and it was far too tedious a process to type on an old Smith Corona and then copy the text back to the computer.  The old green typewriter was destined to wait for many years in the bottom of the closet covered by sweaters and scarves.

Over the years, I read with an awed fascination that some writers still pound the keys.  I pictured them sitting at a desk, with a black iron machine, a fire crackling in the fireplace; the clock wound tight, ticking, and the sound of a dog sleeping.  Peace.  The beginnings of literature pounded into shape in the still of the night.

After several moves, the typewriter came out of storage crates and sat beside my desk, still waiting.  One day I grabbed at the battered old case and opened it.  The old green body with green keys looked the same as the day my dad sat brooding at the kitchen table, keys silent, rum and coke in hand, and the smoke of a cigarette curling into the air.

I found some paper, put it into the carriage, and turned the wheel.  The first few keystrokes were awkward, like the first kisses of young lovers not sure what to do.  Surprisingly it took effort to push the keys down and too much effort made the keys clang together in a tight mess requiring the prying apart of the metal letters.  After sitting untouched for ten years, the ribbon still produced a strong dark ink, and before I knew it, I was captured by the sound of the keys hitting the page, the little bell tinkling its warning, end of page, end of page.  I was sliding the carriage-return back like a pro. I had quite a few number 8’s in my letter, as there is no exclamation mark.  The typewriter demands that the lower case l be used, and then back type with a period placed under, leaving behind a fine impression of an exclamation point.

The act of typing forces ones thoughts to slow down, unlike the computer, which allows thoughts to flow as fast as the fingers can fly over the keyboard.  There is no need to edit as one types on the computer, as it is easy to erase, delete, but the typewriter demands one to slow down as there is a sense of permanence to the writing.

There is something comforting in knowing that this old machine, my father’s machine, now mine, is still working, still willing to be a companion and assist my thoughts on to paper after all these years.  There is also an affection towards the machine, an affection that my father must have felt as he sat before the green keys, and possibly his thoughts, his feelings, his worries, all that he could not speak, came through the keys on to the paper.  I like to believe that a part of him remains with the old typewriter and now keeps me company as I too, sit up late at night with the sound of the little bell tinkling away. So with a final tinkle of the bell, I wish you, good night little friend. 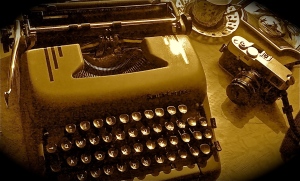 It’s rare to catch me without coffee, a form of camera, or my beloved wire fox terriers. I love the history, the art, and it’s a massive part of my life, as I either paint, write, or get interrupted by my dogs, reminding me of the real world. I hope you enjoy your time here. It’s such a privilege to have readers.
View all posts by susan sheldon nolen →
This entry was posted in Essays and tagged Antiques, Beatles, Books, Dogs, essay, family history, Father, fathers and daughters, Indian Ragas, IPad, Literature, personal essay, Smith Corona, Typewriter, Typewriters, Writers, writing. Bookmark the permalink.

16 Responses to The Old Typewriter