The Morning Rant- She said what? 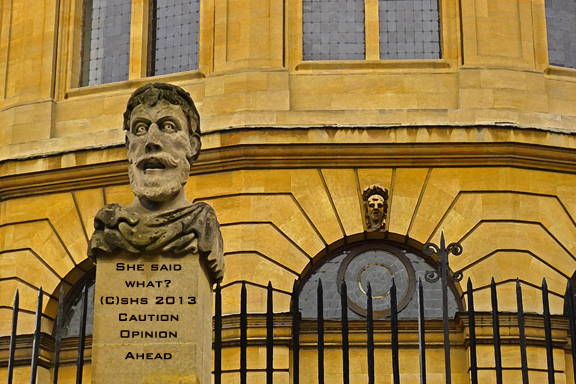 I really couldn’t believe what I was reading.  The current affordable housing shortage is caused by  silly women leaving their husbands? I read the article twice. Three times. Each time the same incredulous stupidity was screaming in that statement.  Penelope Keith of To the Manor Born fame is quoted as saying, ” If only we could educate people to go on living together for longer. It’s all these single dwellings, all these women in their fifties and sixties who suddenly want their own space, to be their own people. To do what?”

Do we really want women and men to stay married in misery for ever to save the housing shortage? Thank God, women now have the freedom to live where and how they choose. We don’t need to go back as far as even the 1950’s when a divorced woman was considered spoiled goods. No one ever scorned the man, it was always…he must have had an awful wife.

If men didn’t leave their wives for younger women,  then men wouldn’t need new houses, nor would the older women, if you want to go along with her logic.  To blame women for this problem is beyond any sort of logical thinking. What’s needed is the building of affordable housing for all age groups and not the mentality of, well you got married, so stick it out, no matter how miserable everyone is.  We can’t have you clogging up the housing chain. It just astounds me that after all the years of media, education, that this sort of thought process even exists. Truly everyone is entitled to their own opinion and if you put it out there in the public, then be prepared for the comments.

I thought that this nonsense was bad enough from this side of the pond, but then an American Writer wrote the same sort of nonsense. Women are creative without children or the most with only one child. This harkens back to thinking of another century when women were slaves to their bodies, without the vote, without rights, and without choice.  Whether or not one does something with creativity is another story, and how a person uses their creativity is another matter. But I have to point out the countless women novelists who write with children and do a cracking good job of it, just think of the outpouring of Maya Angelou.  I can’t imagine JK Rowling writing her fabulous books without her child in mind. Her child indeed was one of the main driving forces to get published.

It’s rare to catch me without coffee, a form of camera, or my beloved wire fox terriers. I love the history, the art, and it’s a massive part of my life, as I either paint, write, or get interrupted by my dogs, reminding me of the real world. I hope you enjoy your time here. It’s such a privilege to have readers.
View all posts by susan sheldon nolen →
This entry was posted in Opinion Rants and tagged Affordable housing, Arts, Arts and Entertainment, Creativity, Feminism, jk rowling, Maya Angelou, Penelope Keith, To The Manor Born, United States, Women, Women Novelists, Women Writers. Bookmark the permalink.

1 Response to The Morning Rant- She said what?