The Old Typewriter gets the dust blown off.

I am not sure whether to laugh or moan. I must be getting older!  I’ve had some children over to the house and what captured their fascination was not the telly, or computer game, but my old typewriter. They all wanted to take turns trying to type, and marvelled that there wasn’t a number one on the keys, and that one had to press lower case L to get the number 1.

Would they be interested in hearing that the QWERTY keyboard came about so that typists would slow down in the 19th century.   QWERTY separted common keys and still left the fingers close to the keys the were most likely needed. Type too fast and the keys jam.  I know I’ve pried enough apart over the years, mind you in the 20th century not 19th!

Pushing the carriage back, and hearing that little bell tinkle, thrilled them to bits. Brows furrowed in concentration as the tricky task of loading the paper, turning the wheel to line things up perfectly was mastered.  I figured they would be at it for a few minutes, but well over a half hour passed, and each had written a letter, some of the type faint, where they had not pressed hard enough, and other bits of typing was thick and black where they had hit the keys with enthusiasm.  There was a sudden rush of panic when they thought they had used up the sheets of paper. But there is never a shortage of typing paper in a writer’s office.  I showed them how to shift the keyboard and make red letters instead of the black, so some of their sentences ended up with a chaotic splodgling of red and black lettering.

How do I refill the ink cartridge, they asked.  Aha, good question, it’s ribbon, and luckily I have  boxes of the stuff tucked away for a rainy day.

What if I run out of ribbon they asked? A question I always push away, worried that indeed one day I will not be able to get ribbon. I bravely say as if this thought had never worried me, Oh, I will just dunk the ribbon in ink somehow and reuse it. Not to worry!

It’s odd to think that I learned how to type on my father’s typewriter, and he made weekly payments to pay off the expense.  It came with a booklet offering him congratulations, you now own the world’s finest typewriter.  This is your portable, the booklet warned rather sternly, There is a right way to do most things including Coronatyping. ( Branding in it’s early days).

I still have the touch typewriting chart with the Qwerty Keyboard, published in 1921 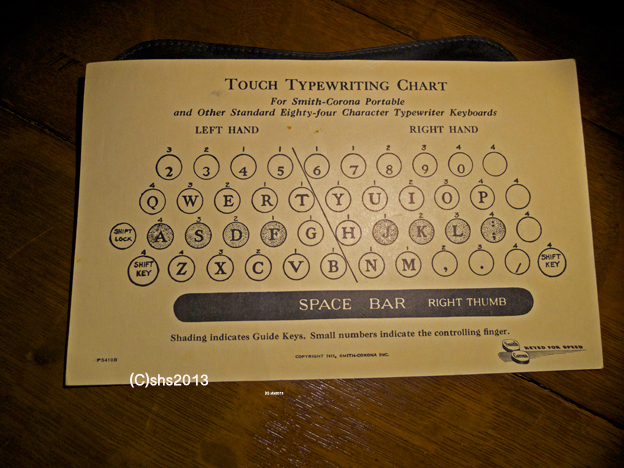 On the back of this chart is a series of typing  practice sessions. I suppose one day, I will be brave and step back even farther in time, and show the children how to use a fountain pen, how to load the ink from a glass inkwell, blot it, and then press the nib down on white paper without spreading ink across the desk.  I’ve written about the old typewriter before, but it just keeps delighting me and a new generation, who now have had the pleasure of visiting my little living museum, called my office.

It’s rare to catch me without coffee, a form of camera, or my beloved wire fox terriers. I love the history, the art, and it’s a massive part of my life, as I either paint, write, or get interrupted by my dogs, reminding me of the real world. I hope you enjoy your time here. It’s such a privilege to have readers.
View all posts by susan sheldon nolen →
This entry was posted in Memories and musings, writing and tagged Antiques, Branding, Cornatyping, Fountain pen, QWERTY, Smith Corona, The Old Typewriter, Typewriter, Typewriters, Writer's Tools, Writers, Writing Tools. Bookmark the permalink.

5 Responses to The Old Typewriter gets the dust blown off.