Tales from the City- Stepping on Time- Greenwich part three

After having seeing Greenwich in one day, I am now convinced that it can’t be done properly. Just the art in the Painted Halls can if viewed with no sense of urgency take hours. There there is the Cutty Sark, the walk along the river, the market, and let’s not forget the golden glory of the  Queen’s Chapel, all probably should be split into two decent days, without rushing about like a mad person who doesn’t even take time to have a proper coffee  like myself.

The Royal Maritime Museum I got to too late and had to fly through the exhibits with the guard chasing behind me with the cry, closing time fifteen minutes.  I would have liked to have stayed longer and read each note under the exhibits, everything from Rat Catching on the Thames to Arctic Exploration, to transporting an elephant from the ship to the dock. I did spend some time oggling the magnificent barge for Frederick which looked too good to use. It must have caused jaws to drop in its time with the gold shimmering in the sunlight, and its army of  sun guards snarling from the boat’s prow, what a sight! The barge was built for the eldest son of King George, Frederick, Prince of Wales.  In 1732, can you imagine the awe this barge would have created amongst the population of London? Anyone seeing it must have thought, it was a gift from the gods. It’s not a small little boat. The barge is about 63 feet in length. It needed 21 oarsmen to move her along the water!  The gold is 24 carat gold leaf…a stunning and exorbitant decoration.  It was a boat of pleasure and once for a regatta in Woolwich, the boat was decorated in the highly popular Chinoiserie style and the oarsmen didn’t get off without donning oriental costumes.  She last saw water in 1849 when Prince Albert and his children rowed to the opening of the Coal Exchange, an interesting combination- glittering gold and dark sooty coal.  She was then promptly sawn into three sections, put into storage, and waited patiently a hundred years before stunning the world again at the Royal Maritime Museum.

The Sun Guards guarding the boat.

It’s a steep climb to the top of the hill through the park to the Royal Observatory. Here in The Royal Greenwich Park you could easily spend an afternoon with a tea flask and just watch the clouds drift overhead. It’s a massive 183 acres, once giving home to deer and foxes, although all I saw that day were some very cheeky squirrels stuffing themselves with peanuts tossed by the walkers. It is the oldest Royal Park. The land  was inherited in 1427 by the brother of Henry V, the Duke of Gloucester.

The trees along the path are donkey’s years old and magnificent. I have a thing for old gnarly trees; they are witness to a troubled world. 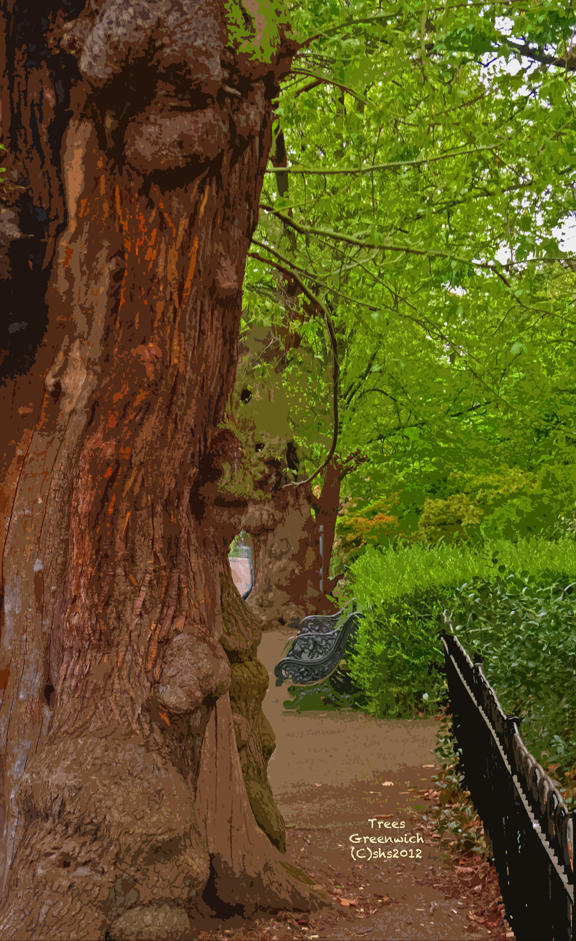 Once at the top the is the Royal Observatory another example of Sir Christopher Wren’s genius. Charles the Second held a great interest in Science and founded a Royal Society in 1661. The Royal Observatory was named  Flamsteed House after the very first Royal Astronomer, John Flamsteed.

Here with science grasping the past and the future in one same instance, one can stand on time on the Meridian line or watch the time ball drop. The Time Ball was first installed in 1833 and dropped at one pm to set the time for the World.  Why One? Apparently, the astronomers used to the noonday sun to make their observations and calculations.

The Mean Time line was in a way the creation of a woman, the mistress of Charles the Second.  In his time, from the position of the sun one could tell one how north or south they were, but not how east or west. Charles’s mistress went to a lecture, in which she learned this problem could be solved by astronomy, so thanks to the dedication of a lover, we now have the Royal Observatory where from the six windows one can see the stars in the heavens from all directions.

Before it gets too late and one misses the train home, there is the view of London, the old and the new, London always alive, always changing with the past as its constant companion. 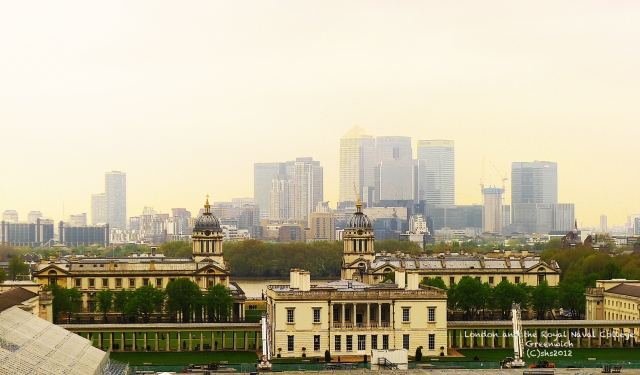 London as seen from the Royal Observatory

It was time to go back home, and warm up with a good hot cup of tea, but I had to stop and gaze just a little longer at the view of London on offer, from the dark Victorian smoke stacks of Battersea to the curious flying saucer shape of the Millennium Dome, each examples of a vision of the future. Each uniquely London.

London where Modern is neither old nor new.

It’s rare to catch me without coffee, a form of camera, or my beloved wire fox terriers. I love the history, the art, and it’s a massive part of my life, as I either paint, write, or get interrupted by my dogs, reminding me of the real world. I hope you enjoy your time here. It’s such a privilege to have readers.
View all posts by susan sheldon nolen →
This entry was posted in Architecture, England, Tales From The City and tagged carat gold leaf, Chinoiserie, Cutty Sark, Greenwich, John Flamsteed, oriental costumes, River Thames, Royal Observatory, royal observatory greenwich, Royal Society, Tales From The City, Thames, Time Ball, travel. Bookmark the permalink.