Tales From The City- The Old Red Pillar Box 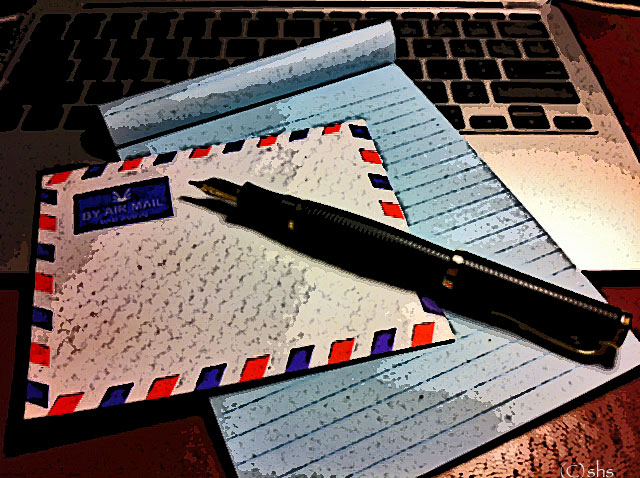 I popped up to Oxford the other week and came back home to loads of post and a few letters to write. Actual letters on paper and with blue ink to post instead of emails! How quickly we get used to change. I still remember the  onion skin airmail paper and the envelopes that were the writing paper and envelope all in one. One just had to fold it correctly and off it went with its lovely little airplane symbol on the front.

I used to love to run down to the red pillar-box and stand on tiptoes to slide in the letter. What magic it was to hear it flutter down to the bottom and know that shortly it would be winging its way across the pond.

The old red pillar-boxes are still about. They’ve been hanging around streets since 1852, and to my delight and surprise their appearance in England was heralded by a great writer, Anthony Trollope, who at the time was working for the post office as a surveyor’s clerk and trying to sort out mail pick up from the Channel Isles. In his travels to Paris, he had noticed letter boxes on the sides of roads and thought this might work in England. The rest as they say is history. After the trial proved to be a success, the long search for the perfect pillar-box started. Flaps, shelters, were all worried over, trying to prevent the rain from getting in.  The basic design remains the same to this day, all were vertical pillars with a small slot to receive the post (it is small! I’ve had to fold a large envelope to shove it in!)

The colour started out in a deep green in an early eco-friendly attempt to avoid blotting the countryside, but apparently there were complaints that they were too hard to see.  Chocolate brown was tried, but in the end red proved to be the winner. That colour was introduced in 1874 and so it remains to this day. I’m pleased with that result as they are cheery stout little friends on London Streets.

Before the red pillar box showed up on the streets, senders would have to take their letter to a person who was the “ receiver of letter”, usually to a house, or a coaching inn, where the Royal Mail coach would stop and pick up letters.  If there was no coaching house then there was the Bellman. The Bellman walked the streets ringing his bell collecting letters. London was noisy back then, the rag and bone man shouting out, the bellman ringing his bell, veg and fruit sellers hawking their wares, it was a loud and noisy life. I think that noise is better than what we have today. Motorbikes suddenly appearing from nowhere, whining and roaring at the same time, the ear shattering booms of car radios, mobiles phones ringing and the odd one-sided somewhat shouting conversations the passer-by is forced to overhear. But maybe I am just a romantic and people of the veg and fruit seller day, found his shouting, “buy my spuds”, just as annoying.

One of the things I never gave much thought to is that these red pillar boxes gave one a great sense of privacy. No longer did you have to hand over your letter to someone in a coach inn and put up with their peering at who you have written to, or run out into the street to catch up with the Bellman. The Bellman reading the addressee often decided to have a chat with you, “ sending a letter to Mr. Smith eh? Brother? Uncle? Oh I see a Doctor? Everyone feeling well then?”  And so on…Now with the new pillar boxes, you could just pop the letter into the box and be done with the whole affair.  Sending letters was quite a big event in those days. Now machines read the postal codes and send the letters on to the correct sender. Well mostly.

There used to be a wonderful place that I imagine still exists in small villages in rural England, the Post Office Shop. Although in the news of late, small local post offices are closing fast and furious. The last one I remember was in Forrest Row. It was a lovely little shop with blurry glass panes held into place with lead. It sold postcards, Noddy Books, string, stamps, water pistols, writing paper, and sweets. That’s what I remember, the most important bits. I imagine it also sold things for grownups, but what does that matter? The woman behind the counter had been in this little post office for donkey years. She was plump, friendly, and nodded in appreciation when I asked how much the little Noddy Book cost. It was more than likely a first edition judging by the yellowed edges. She was pleased that I was showing interest in it. It had waited in a little wire rack at the front of the counter for years desperate for someone like me to come along, and she was happily prepared to sell it.

We had a post office at the corner of our street, and a green grocer, but that is all gone. The post office now is inside the grocery store, or if you really want to have a proper walk, you crack on down to the main post office, but there is no magic there anymore. You queue up and get out as fast as possible.

There was once a tube station called Post Office, but it was changed to St Paul’s in 1937. Apparently, it was a hot bed of activity. I wasn’t around to see it.

The post office apparently was quite a draw in 1829 at St Martin’s le Grand. Tourists would come to see the mail coaches setting out for all corners of Britain. Gas flames illuminated the night, whips cracked in the air, the sound of hooves clattered on the pavement as the postal coaches set off bearing good and bad news. My postman rides up on a bike, parks it down one half the street and then the other, and so on. The noisiest he ever is, is when he needs a new brake pad on his bike.

The red pillar-box on my road is leaning, a result of an argument with a large tree root. The tree root is slowly winning.  Mail used to be delivered and collected twice a day, but some days, there is no post at the house. Email, Facebook, online bill paying has eliminated so much of the post. Still, junk mail filters through, I don’t think that will ever disappear.

There’s post boxes stuck in train station walls. The one at the train station came about in 1857 to accommodate the passengers on the train. Although a great time saver, it had a small capacity. It was built into the wall. The two blue brackets are holding up the platform covering in this photo.

I meant to stop and post my letter on the way home at the station, but I forgot. So home I head and once indoors I’ll root around for a first-class stamp and then set off down the street.  I am going to post a wedding card, and let it fall through the wide mouth of the old pillar-box, give it a pat on its belly and walk back home.

It’s rare to catch me without coffee, a form of camera, or my beloved wire fox terriers. I love the history, the art, and it’s a massive part of my life, as I either paint, write, or get interrupted by my dogs, reminding me of the real world. I hope you enjoy your time here. It’s such a privilege to have readers.
View all posts by susan sheldon nolen →
This entry was posted in England, Memories and musings and tagged Airmail letters, Anthony Trollope, Antony Trollop, Channel Isles, England, Forrest Row, Letter box, London Streets, Mail Coach, Noddy Book, Pillar box, Post Office, Red Pillar Post Boxes, St Marin's Le Grand, Tales From The City, The Bellman. Bookmark the permalink.